Beach over the River Kwai

I still have my wedding ring. This challenge is in the bag!

Since we arrived in Thailand, both my wife and I realised we had walked at least 35 miles (thank you step tracker) just from sightseeing and travelling from place to place. We don’t mind walking about to see things; in fact we love it! But when you’ve been marching about in 33+ degree heat for 2 weeks, your enthusiasm for charging about like a hyperactive child who’s eaten an entire box of Cadbury’s Celebrations tends to wane.

Probably wasn't that pretty in the 1940s.

I had put the death railway (cheerful eh?) on my list of things to do whilst we were in Thailand. Also known as the Burma railway and Siam-Burma railway, the death railway was constructed by the Japanese empire during the second world war to support its forces in Burma with supplies and ammunition. Made famous by the film “Bridge on the River Kwai” depicting British POWs being forced to complete construction of the bridge over the river, the death railway attracts visitors from all over the world. And because I love trains (sadly I am also a train nerd...isn’t my wife a lucky woman?), we had added this to our rough itinerary.

A mutual decision was made to remove this from our itinerary for the following reasons:

4.We were about ready to sabotage the bus network of Thailand.

5.I really wanted to lie by a beach for at least a week drinking beer, writing, and swimming (perhaps not all at the same time)

Our conclusion was “sod the railway, let’s go to one of the islands everyone talks about

Next to Phuket, Koh Chang is one of the most popular destinations for tourists visiting Thailand.

First of all, Koh Chang is pretty. The island has miles and miles of sandy beaches along the Gulf of Thailand with nice restaurants and small bars overlooking the sea where you can while away your hours just taking in the view. During the day it can be blissfully quiet with just the sound of the ocean lapping against the sand or rocks. At night you can go to sleep to the sound of crickets, the sea and the breeze through the trees. 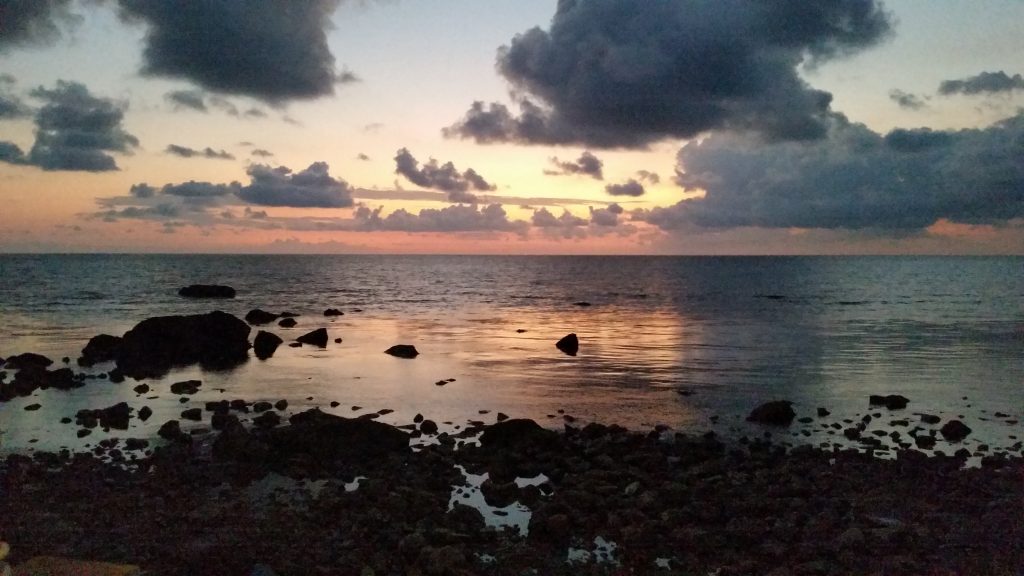 Not photoshopped. I took this myself without any filters. 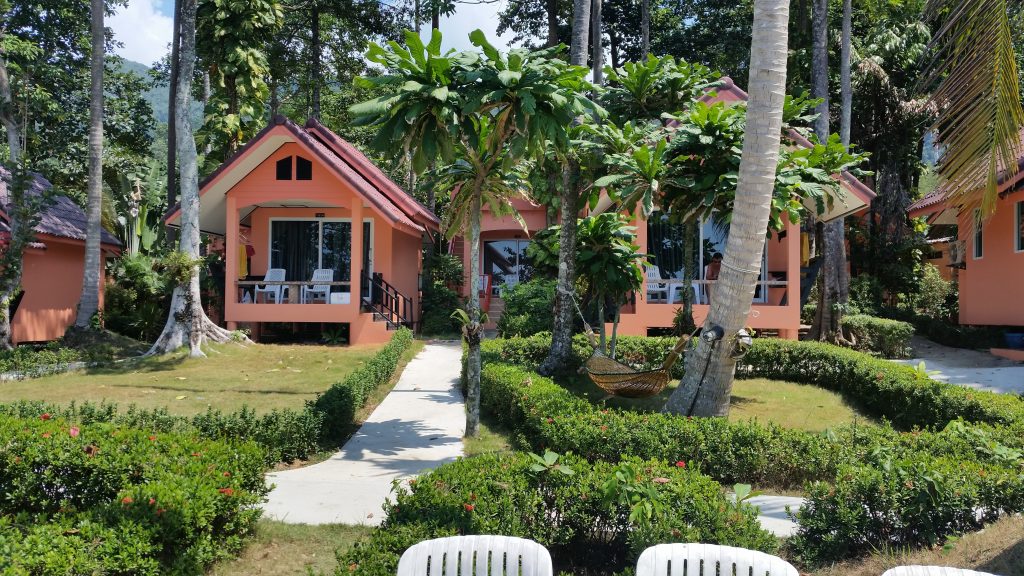 We stayed here. It was pretty damn cheap too! 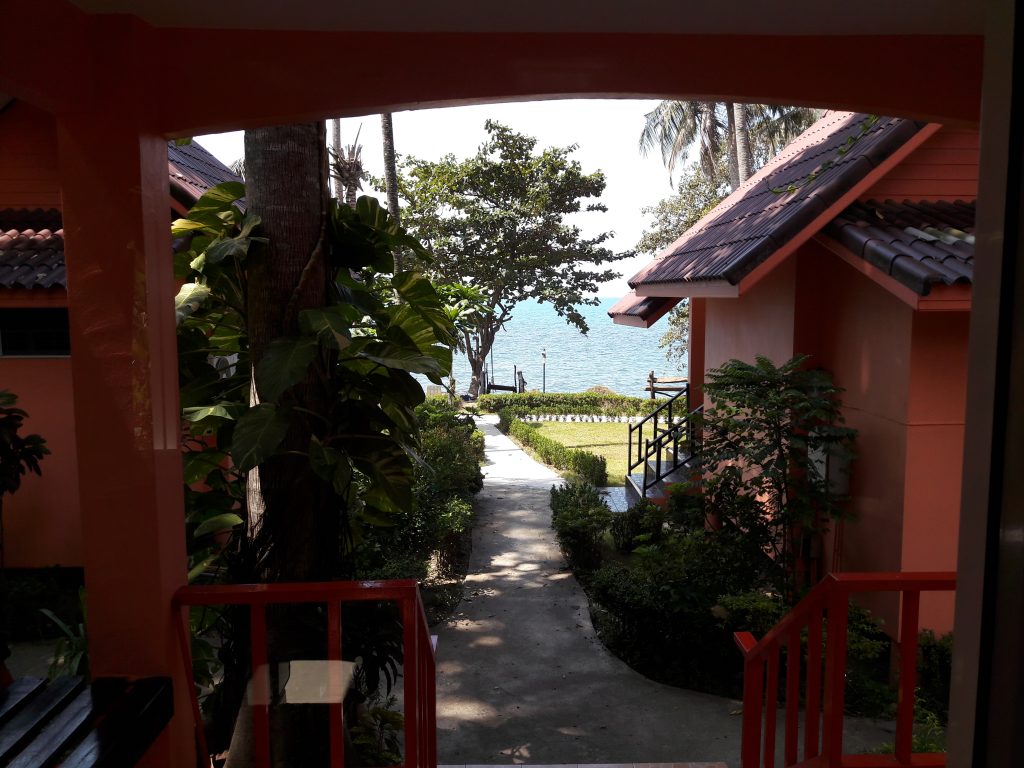 View from our bungalow.

Of course like all holiday islands, your chances of experiencing all of the above depends entirely upon your location. Had we to do it over again, we would have spent a bit more time researching the quietest places to stay instead of picking the first reasonably priced place by the sea that had 4 stars on Trip Advisor. The devil is always in the detail.

Think “Death In Paradise meets Benidorm” and you’ll have a rough idea of what Lonely Beach is like. As you can see, where we were staying was actually beautiful. We had a bungalow overlooking the sea, were surrounded by trees and greenery and could take an afternoon doze in a hammock if we wanted (and I did). The local restaurants were cheap, the food was delicious and we found 2 of the best bars overlooking the sea I’ve ever had the fortune of chilling in. We flitted between the bars every night we were on the island to relax and watch the sun go down before heading out to dinner.

But there is another side to Lonely Beach that the locals hate and in a lot of cases Trip Advisor fails to fully warn you about. Once the sun goes down and everyone’s fed and watered, a few infamous beach bars begin thumping out bass tunes that should have died in the 90s and 00s. Worse still...they are mostly empty! Women wearing next to nothing spend the day scouring the beach and nice bars trying to hand out free tickets to the “parties” that no one staying there actually wants to go to unless they’re:

a) Drunk
b) Stupid
c) Drunk and stupid

I know what some readers might be thinking here. “Oh you’re just an old fart who doesn’t like partying and music.” A fair charge perhaps were it not for the fact that:

a) Lonely Beach is filled with farts of all ages and backgrounds including families, twenty somethings, thirty somethings, old gits and someone who looked like a sunburnt Crocodile Dundee.

b) I love music and dancing (you’re talking about a guy who does latin and ballroom dance for fun).

c) All the people the women approached with tickets kept turning them down.

And guess what? The only people we all saw attending the party bars (and there weren’t many) were:

a) Drunk
b) Stupid
c) Drunk and stupid

In the past I have been as drunk and stupid as the most idiotic 18 year old boy who’s just discovered how much power the penis holds over his decision making process. But Lonely Beach didn’t look like the kind of place that catered for that mindset. Like us, all the young people (I’m still young dammit!) I saw being offered party tickets, politely refused. In fact even at the backpacker area we were staying in, people of all ages seemed more content eating and chatting in the relaxed bars and restaurants than they were downing buckets of cocktails before passing out on the beach. We were out late a few nights when the music was raging so it’s not like we weren’t checking.

So what’s going on?

My wife and I discussed this a lot over the week as we couldn’t figure out why the bars were playing live sets to empty rooms, or pumping out drum ’n bass as people walked past refusing to enter. The only thing we could conclude is that “these-times-are-a-changin”.

Many millennials (and I hate that word being used as an insult as my wife falls within the bracket and I straddle it...no dirty jokes please) don’t appear to drink in the same way other generations have. I’ve seen millennials party and fall down with the best of them (and yes...we still do from time to time), but there was a palpable difference in what we saw people our age and younger doing on Koh Chang compared to what certain bars in the resort wanted us to do. My wife and I might be wrong and feel free to frown and disagree with us, but my impression of Lonely Beach is that the local businesses have failed to adapt quick enough to a changing tourist market. We all know what happens if you can’t adapt; your business will fall. So it will be interesting to see what happens to the area in another ten years or so. Maybe it will go full circle and return to the quiet palm tree filled paradise it apparently was a decade ago.

Not so lonely beach...but still plenty of space to chill and swim.

Is Koh Chang worth it?

Overall we had a great time and the place we stayed at was lovely. Watching the sun visibly fall beneath the ocean from a bar over the sea or from a hammock will never get old for me. So relaxing and calm inducing. The locals are friendly and hospitable and you can just dodge the party tickets and bars if you don’t want to go. And if you do want to party to drum ‘n bass at night, it’s the ideal spot. Besides, I had ear plugs to drown out the more annoying tracks. Result!

Pros and cons of staying at Lonely Beach, Koh Chang

Outstanding natural beauty and peace accompanied by friendly locals and lovely food. Spoiled only a little by deserted, noisy and dated party bars at night. 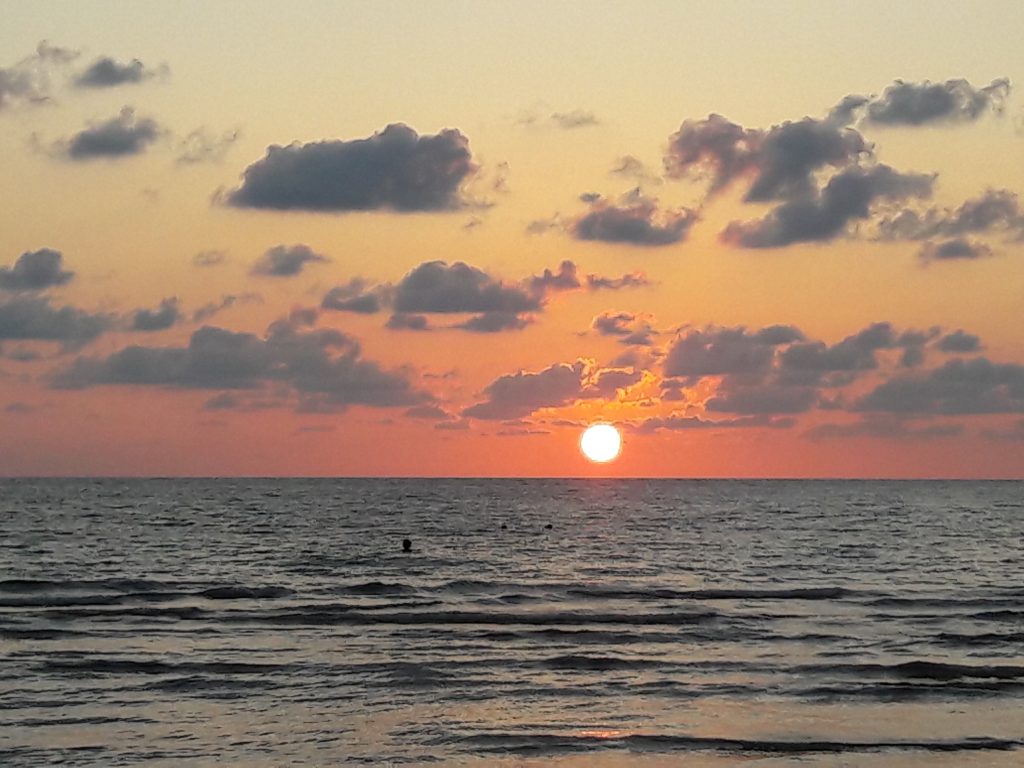 You can actually see the sun sinking below the sea...but my video was crap, so I deleted it.